Android Programming In Java: Starting with an App 3rd Edition 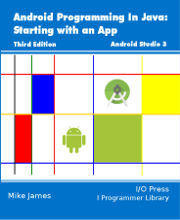 Programming an Android app is an attractive proposition. Android increasingly dominates the global smartphone market, meaning many potential users. The tools you need to create an app are free to download and use and you don’t need anyone's permission to get started.  The only difficulty is that the Android is a tough system to master. It is easy enough to get started as Android Studio will build you a Hello World app in a few minutes, but what you do next is more difficult and to create a good app you need a feel for how the system works and its limitations.

Android Programming In Java: Starting With An App not only shows you how common tasks are done in Android Studio 3, but also explains why they are done in a particular way. Although Android development seems confusing at first, it has patterns which mean that having done something once you can generalize the approach to components you haven’t previously encountered.

There are plenty of examples in this book but they are deliberately simple, stripped down to let you see what is essential. It isn’t a complete treatment of everything Android.  Instead it focuses on the things you need to know to write an app, in particular creating the user interface (UI) because this is what you spend most of your time working on even if the app in question is sophisticated. In this book you will find out how to build an app with a single Activity and a UI, a good foundation for further Android programming.

Mike James is editor of I-Programmer.info, an online magazine written by programmers for programmers. His programming career spans several generations of computer technology but he keeps his skills completely up to date. As an author he has published dozens of books and hundreds of print articles, a tradition he now continues online. He has a BSc in physics, an MSc in Mathematics and a PhD in Computer Science and possesses an excess of Androids, both tablets and smartphones. 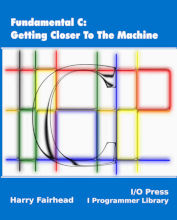 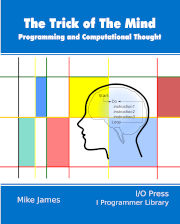